December 2014 - The first FLYIT Professional Helicopter Simulator (PHS) N9301H, manufactured in 2000 has been upgraded and approved by the FAA as a FTD level 4. 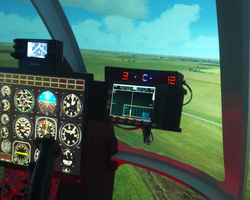 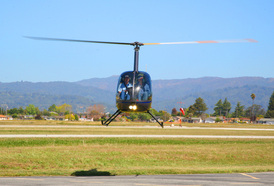 FLYIT Simulators Inc. is celebrating the 13th year of FAA authorization of its Professional Helicopter Simulator allowing 7.5 hours to be logged towards VFR flight time.  FLYIT Professional Helicopter Simulators have been used since 2001 for effective and safe hover training.  Student pilots can learn to hover real helicopters in 1 or 2 hours by hover training in a FLYIT Professional Helicopter Simulator, as opposed to the 10 to 20 hours it can take them to learn by doing all of their hover training in the real helicopter.  As a result, students save money and begin their training in a safe, realistic environment.  The operator also benefits by having fewer hours and less maintenance on their aircraft with a profit-generating business tool that will earn two to three times more net profit than the training aircraft.

FLYIT Professional Helicopter Simulators combine large FLYIT “Ground Reference Out the Window Views” with FLYIT Technology Advanced Flight Motion System to create a superior sense of motion compared to other FTD’s on the market.  The FLYIT PHS accomplishes this while staying within the 150 millisecond transport delay which is required by the FAA for part 61 and part 141 training operations to log the maximum simulator training credits.

FLYIT helicopter simulators incorporate a stick shaker that lets the pilot feel rotor vibration in addition to FLYIT technology that allows the pilot to actually feel the skids touch down.  FLYIT’s combination of these and other features results in the most effective transfer of learning in an ATD.

Many safety issues like inadvertent entry into IMC conditions require the development of solid decision making skills by the pilot.  These safety skill sets can all be acquired in FLYIT simulators.  FLYIT simulators are used for the training of most emergency procedures including the chain of events leading to inadvertent entry into IMC conditions, engine failure, tail rotor failure, avionics failures, and more.  More than 30 failures and emergency procedures can be initiated by the instructor.

PHS simulators include a Jeppesen database with over 25,000 airports.  Each FLYIT Professional Helicopter Simulator comes with 9 different flight models and the ability to change between a standard cyclic and the Robinson style T cyclic.  The flight models included are R22, R44, R66, Schweizer 300, Enstrom 280FX, Bell 206, Bell 407, MD500, and AS 350B2.  All V-numbers in each flight model match those in the Pilots Operating Handbook for each aircraft.

FLYIT Simulators are used by law enforcement agencies across the nation to train and maintain the proficiency of their pilots.

Stop by booth # 1129 and test-fly our Professional Helicopter Simulator!

This expands the Saudi Land Forces' complement of FLYIT Simulators to 8 units. 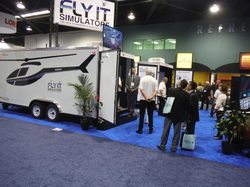 
FLYIT's two helicopter simulators were a huge draw at the EXPO, where lines of people queued for a chance at a test flight.  The other exhibits we were able to visit were amazing as well!

We made a lot of new friends and look forward to working with you in the future!


SIGNL monitors the fastest growing companies across more than 500 industries, and has bestowed the honor of 40th place among 451 companies in the electrical equipment manufacturing industry.

Join us for HELI-EXPO 2014 this February in Anaheim, CA.

Heli-Expo is the largest helicopter exhibition in the world. It is organized by the Helicopter Association International.   In 2013, it attracted 20,393 visitors from all over the world.  It is one of the largest gatherings of the industry it is often the place where innovations are introduced.

Naval aviation for Mexico dates back its roots all the way to 1918, when an indigenous made float biplane was successfully tested at the Port of Veracruz, the aircraft was flown by Carlos Santa Ana.

As of 2001, Mexican naval aviation reported to have 118 aircraft, of which 68 are fixed wing in 9 squadrons and 50 helicopters in 9 squadrons, either in land bases or assigned on board of ocean patrol boats and frigates.

More recent purchases to the fleet were three ex-IDF/AF E-2C Hawkeyes, the first arriving in early July 2004.  At the end of the same month, the first two EADS upgraded C212-200 Aviocars flew back to Mexico, with the remainder six being upgraded at BAN Las Bajadas. The most recent purchase are two AS565 Panthers for the performance of shipborne duties. 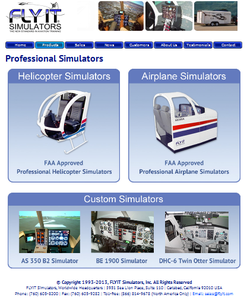 We are proud to announce the new FLYIT Simulators website for 2014.  The new site features improved navigation, mobile device compatibility and more!

Stay tuned as we unveil exciting new programs over the coming year: 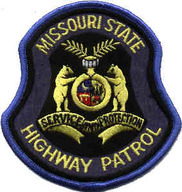 May 9, 2012 - FLYIT Simulators ships a Professional Helicopter Simulator equipped with a Bell 407 Flight Model with Full FADEC Failure to the Missouri State Highway Patrol at their avaition facility in Jefferson City, Missouri.

The Missouri State Highway Patrol's Aircraft Division strives to provide a valuable service to the citizens of Missouri and the law enforcement community. The organizational structure of the Aircraft Division consists of a division director, eleven pilots, two aircraft maintenance specialists, and an administration office support assistant. The pilots are strategically located in various locations throughout the state to ensure adequate statewide coverage. The aircraft fleet consists of five helicopters, eight single-engine Cessnas, and two twin-engine Beechcraft King Airs.